The 8810 Remote Terminal Unit (RTU) is a modular, Ethernet enabled, communications device. Its powerful industrial chassis is ideal for integration with tank gauges and other field devices used in inventory management applications. With support for up to six interface modules, it is extremely flexible in handling data exchange across multiple communication protocols.

With the CPU module serving as the base functionality for the 8810 RTU, all logic and protocols are handled seamlessly, meaning there is only one firmware application for the entire unit. 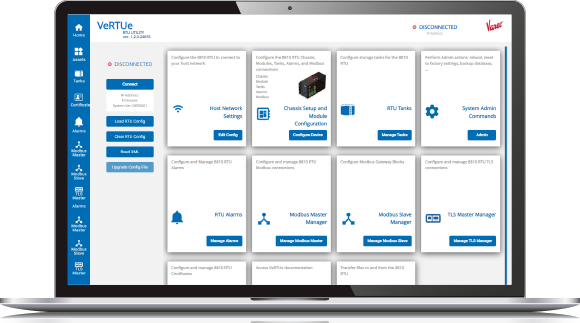 The 8810 RTU comes with its own configuration application. Vertue is intuitive, extremely user-friendly and browser-based.

Other protocols supported through the Serial module include Veeder Root, Hectronic and Ronan. The 8810 RTU can be integrated with a variety of human machine interface applications.  FuelsManager, a suite of software applications used to track, manage and control the receipt, storage, distribution and delivery of fuel and related products, has built-in functionality for easy integration with the 8810 RTU.  Examples of other supported HMI manufacturers include Honeywell, Rockwell Automation, Emerson and Wonderware.

The 8810 RTU meets radiated and immunity certifications for the following: